This Facebook post sums up why we do this. If one person finds happiness in our music, then we consider every one of our 12 years as a band worth it. Thank you Joseph Michael Robertson:

“Thank you Jim Azevedo, Matt Reed and Zack Alves of the band called the Rivals for making in my opinion one of the best albums I’ve ever heard. We Live Electric is already one of my fave albums ever! I cannot stop listening to it. It has been another inspirational guiding light in my life. This is a masterpiece… We live in fear, or is it fear lives in us, that we don’t question enough, the problems and solutions… Great lyrics and music, I’m in true awe.”

Check out the Metro’s “Guide to San Jose with Zack of Rivals.”
Thanks to The Metro and Aaron Carnes. I knew that someday all of those trips around SJ eating burritos would be worth something… http://activate.metroactive.com/2012/06/zack-alves-guide-to-san-jose/

Great show at the Uptown in Oakland last night. It was our first time there. We got to share the stage with two great, in-your-face punk rock bands: War of Aggression (Members of a band called United Defiance, with whom we played a bunch of east bay shows back in the day), and Bum-City Saints. Both Bands played their hearts out and were no BS, honest punk rock – just like like it. I’m sure we’ll be doing more with these guys!

We may not have had 500 people in the crowd last night, but we accomplished what we went there to do: connect with every single person in the room. We played the full bag of tricks — Matt jumped to the floor and got in people’s faces, we kept clapping until we got 100% of the room going, we shared the mic with the crowd, and we just kept rocking, screaming, and sweating until people believed us. It was fun, and how every Rivals show should be.

One of the things that I like most about playing in a band is walking into a club not knowing the bands, or some of the people that are there for the show, but by the end of the night, seeing most everyone smiling, hugging, sharing stories and making new friends. Last night was definitely one of those nights.

Thanks to Samantha, Nick, Todd (thx for the pic), Jen and Noless for making it a memorable night. We love ya. 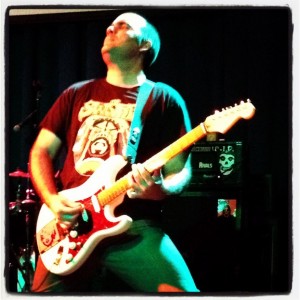 Our 10th Annual Rock and Roll Halloween and Album Release was a success, and man, we couldn’t be happier. Here’s our set list from last weekend:

101 degrees. That’s my body temp right now — yep, a week before our 10th annual Halloween show and album release I’m sick as a dog. This was my last weekend to be out promoting, but I’m down for the count. Thankfully Jim is picking up my slack: he was all over downtown San Jose last night and will be at the Papa Wheelie show tonight, happening at the Time Out up in Concord.

I’m not the only one who is sick right now. Matt is just recovering from a bug as well. And it’s no surprise. It seems every year something happens to us around Halloween to keep things interesting.

The band has a saying that goes “No knives, no extreme sports, no yard work” which we start telling each other in late October. It basically means: Be fucking careful! One October I sliced my hand open on a knife doing dishes, Jim hurt himself mountain biking and using a power tool, Matt twisted his ankle, and I threw my back out. But every year, we laugh it off and find a way to keep going…

Can’t wait for next Saturday. Hope to be back 100% and ready to kill.

I think I’ll cover myself in bubble wrap until then.

After five years of writing, recording, trashing dozens of ideas (we have a special folder called the “jank hole” for that specific purpose), and a few direction shifts, it’s finally done. Our new album is, as they say, in the can.

When I listen to the completed songs, it’s impossible for me to just sit back and enjoy them as a finished album. I wish that I could. By now, I’ve heard the songs literally hundreds of times, and for every part of the finished song I hear, I remember at least a few ideas that either didn’t work in that same place, or how the song was stitched together piece by piece. I’m sure that a lot of musicians and artists feel this way. I really wish that I could listen to the new album with no expectations – just like you can (well, on Oct 29 anyway).

Being so close to the album, I have absolutely no idea what you, and most people, will think of it. Totally impossible…

All I know is that we poured our damn hearts out on this thing. The music, lyrics, and actual recording represent the best that we can do at this point in time. The subject matter (which I’ll probably babble on about in a future blog) is honest and speaks to me as a “thirty something” as much as our 2001 demo spoke to me as a early twenties kid trying to find his way. The band feels, as we always have, that as long as we make honest music, it matters less if we miss a chord or two, or aren’t the most popular band in the world (or even San Jose)…If you get something out of this, then we have done our job.

Even if it’s using our new album as a drink coaster.

It sucks because I’m up until 2am every night doing random Rivals projects – from mailing tickets to album artwork to flyering at shows. It sucks because the late nights make me groggy at work and keep me from hanging with friends. Early October sucks because, every year, we try to do more and more with seemingly less and less time and money. And it sucks because it seems that every project has a 3-week turnaround, which means that if we don’t do it NOW, it won’t be ready by Halloween.

Now, before you think that I’m complaining – Let me tell you what doesn’t suck: Late October.

(On a serious note, check out today’s news about the first rock concert in Afghanistan in 35 years. I hope the kids keep rocking and continue to give peace a chance: http://worldblog.msnbc.msn.com/_news/2011/10/03/8029289-kabul-rocks-with-music)

The song ends. There’s a pause… and in a rare moment, I don’t have a damn word to say. I just stand there nodding my head like an idiot. We had just played three songs, but to me, it was time travel.

For this year’s Rock and Roll Halloween, the guys and I wanted to do something special to honor our decade as a band, so we decided to dust off some old Rivals tunes. We chose our regular set opener from 2002-2005, one that we haven’t played in six years, and another that was lost when Dave, our first bass player left the band.

While playing the last song of the three, I could have sworn it was 2002. Back then, the band was only a year old. We were on this exciting new adventure, learning how work together as artists, and were literally bleeding on stage every single weekend as we clawed to the top of our small scene. Those were good times. Personally, 2002 represented a time when I still had my innocence… I had not yet lost a parent, two dear friends (who loved and supported Rivals), and didn’t have to balance the needs of Rivals and “growing up.” All of this came rushing back to me when those first few notes came out of Tom’s bass.

And then I wondered what these songs, would possibly mean to you. Were you with us the last time these songs filled a room full of people? Was it at the Cactus Club in San Jose? A garage in Salinas (we played many)? or would any of these songs be YOUR soundtrack to that old relationship, high school, the dot-com bust, or that summer lounging around…?

On October 29th, we will get to share these songs with you again. And for some of us, it will be just like old times.

Rule #1 of releasing an album: NEVER plan an album release party *before* your album is done.
We’ve heard that a hundred times – online, in magazines, from other bands – the horror stories go on and on: Band doesn’t get album done in time, show flops, band feels like idiots, fans kill guitar player.

Back in 2004, we learned that lesson the hard way. We were getting set to release “A Second Chance At Retribution” and we openly ignored the almighty rule. It was August, we were still mixing the album and we thought “Let’s book the show on Halloween… we’ve got 3 months to finish…WHAT’S THE WORST THAT COULD POSSIBLY HAPPEN?” Well, a few challenges and delays later, we were sitting in mid October with no record…

Our producer and friend Kent Matcke was pulling all-nighters and busted his ass up to the last minute (we still worship him for that!) With only days to go, we send the album to mastering (the final “touch” of making a record). One day later, I get a phone call from the dude mastering the album and he says, “something is wrong with the mix of the album, you guys are going to have to get me an updated version. Oh, and I may not have time to do it before your deadline. OH, AND you’ll have to pay me another $900.”

I was stressed. The band was stressed. We had no money. We had no time. And the show was a week away. Well, in the end, he did finish the mastering in time, the manufacturing was complete the day *before* the show, and we spent all night putting all 2,000 copies together by hand.

Again, Rule #1: NEVER, EVER, EVER plan an album release party *before* your album is done.

So, fast forward to today, and here we are again: getting ready to release another album and staring a Halloween/album release show in the face. And guess what? The album isn’t done yet! That’s okay… we’ve done it before… I mean, c’mon… WHAT’S THE WORST THAT COULD POSSIBLY HAPPEN?